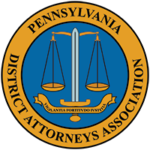 “The Pennsylvania Supreme Court’s majority decision to vacate the sentence of William H. Cosby, Jr. was based on a procedural issue, not the facts of the case. The prosecutors in Montgomery County followed the facts and evidence in the case against Cosby and, in doing so, gave women who are victims of sexual assault and violence a voice.  While it remains difficult to be a victim of sexual assault, we hope that the decision does not discourage future victims of sexual violence from coming forward. The message coming from today’s decision should be focused on victims of sexual assault, because they are the individuals for whom justice too often remains elusive.  Victims deserve to be heard, and the PDAA is committed to continuing to help to empower their voices with others, like the Montgomery County District Attorney’s Office, who day after day seek justice.”

| Follow @PennsylvaniaDAs
2 days ago
RT @jerryd1426: The good things going on in Chester take vision, resources and partnerships that develop from trust built over time. Kudos…