My name is John Adams, and I am the President of the Pennsylvania District Attorneys Association and the District Attorney in Berks County.  I appreciate the opportunity to appear before the Sentencing Commission today to discuss the proposed change to the Guidelines to increase the Offense Gravity Scores for drug delivery crimes involving fentanyl, an extraordinarily dangerous and deadly synthetic opioid.  The PDAA strongly favors the proposed increases.

As the DEA recently reported, fentanyl sales and overdoses represent a major health and public safety crisis in Pennsylvania.  Fentanyl now ranks as the top killer drug in Pennsylvania – higher than heroin. It was found in 52 percent of overdose victims who died in Pennsylvania in 2016. The 2,395 deaths linked to fentanyl and its analogues represent a 130 percent increase from 2015. The biggest increase in fentanyl-involved deaths was found in victims ages 15-24, which saw a 380 percent increase in fentanyl-involved deaths.

Fentanyl is incredibly dangerous.   It is really like nothing else we have seen.  Like heroin and other potentially lethal opioids, fentanyl works by binding to the body’s opioid receptors, which are found in areas of the brain.  Its effects resemble those of heroin and can include respiratory depression and arrest, unconsciousness, coma and death.  But fentanyl is so much more deadly than heroin and other common opioids.  Why?  Because it is incredibly potent.  Fentanyl is 100 times more potent than morphine and as much as fifty times more potent than heroin.  Fentanyl’s potency means that it is easy, indeed too easy, for people to ingest much more than they think they are actually taking.

As one Canadian addiction specialist, Dr. Gabor Maté, put it, “whereas the doses of morphine we measure in milligrams, the doses of fentanyl we measure are in micrograms, which is one millionth of a gram.”

The statistics are alarming.

Sadly, the Berks County experience is not unique.  Here are just some examples, according to OverdoseFreePA:

Thus far in 2017, more than 70% of drug overdose deaths in Allegheny, Adams, Beaver, Chester, Lawrence and Westmoreland Counties involved fentanyl.  In October in Montgomery County,enough fentanyl was seized that could have killed half of the county’s 800,000 residents. According to the Philadelphia Department of Behavioral Health, from 2015 to 2016, overdose deaths with fentanyl present more than doubled in the city of Philadelphia – going from 184 in 2015 to 413 in 2016.

The Health Commissioner of Philadelphia, Thomas Farley, has said that fentanyl “has thrown gasoline onto a fire that was already raging.”  He adds, “[t]his is a health crisis that’s worse than we’ve ever seen,” Farley said. “This will kill more people than the AIDS epidemic. You’d have to go back to the influenza pandemic of 1918 if you even wanted to start making comparisons.”

Fentanyl also endangers the lives of law enforcement officials. According to the most recent DEA Threat Assessment:

Only properly trained and outfitted law enforcement professionals should handle any substance suspected to contain fentanyl or a fentanyl-related substance. If you suspect the presence of fentanyl or a fentanyl-related compound, do not take samples or attempt presumptive color testing and follow approved transportation procedures to transport it to the nearest laboratory.

Officers in Dauphin County, by way of example, are no longer testing drugs they seize from suspects and instead send them to the State Police lab, because fentanyl can be absorbed through the skin, potentially causing an overdose.  According to the DEA:

Just touching fentanyl or accidentally inhaling the substance during enforcement activity or field testing the substance can result in absorption through the skin and that is one of the biggest dangers with fentanyl. The onset of adverse health effects, such as disorientation, coughing, sedation, respiratory distress or cardiac arrest is very rapid and profound, usually occurring within minutes of exposure.

First responders in a number of jurisdictions have overdosed as a result of being exposed to fentanyl.  In May of this year, a police officer in Ohio accidentally overdosed on fentanyl when he brushed some of the powder off of his uniform. He survived because he was immediately treated. A deputy and two emergency medical technicians in Maryland were all inadvertently exposed to fentanyl, despite wearing gloves while on the crime scene. One of the EMTs needed to be administered Narcan, and the other two felt ill from the exposure and were treated. And eleven SWAT officers in Connecticut set off a flash grenade during a drug raid that put fentanyl in the air and caused them all to be dizzy and nauseous, and in some cases, vomit from the airborne exposure. All eleven were sent to the hospital for treatment for exposure to fentanyl.

The fentanyl crisis is driven significantly by the profit motive of drug dealers.  Dealers are selling fentanyl to make profit.  Jim Scott, resident agent in charge at the Louisville office of the DrugEnforcement Administration, has said what all of us in law enforcement know to be true:  drug distributors mix heroin with fentanyl simply to increase their profit margin.

Distributors mix heroin and fentanyl — both are a white powder — to increase the drug’s potency and to lower its cost. A dealer or drug cartel can mix a kilo of heroin, which has a higher street market value, with three kilos of fentanyl, which has a higher potency, and quadruple their profit. And oftentimes users have no idea what they have bought.

Sadly, heroin is not the only drug that dealers mix fentanyl with.  We are seeing instances where they mix it with cocaine.  Overdose records in Philadelphia show that at least 162 people died there last year from a combination of fentanyl and cocaine.

In short, dealers are mixing fentanyl with other illegal and dangerous drugs for money.  Dealers are profiting.  After all, drug dealing is a business, a very dangerous business.  Fentanyl dealers are not small corner drug dealers trying to feed their addictions by making a quick buck.  They are dangerous criminals looking simply to profit without regard to the fact that what they are selling can kill the user quickly.  We cannot show any mercy to any fentanyl dealer.

It is for these reasons that the proposal before you to increase the OGS for the sale of fentanyl is desperately needed.  Before I became District Attorney, I was a career defense attorney.  Addicts need to be treated; we need more treatment beds.  Addiction should not be criminalized, and long sentences should be reserved for the most serious offenders.  I am here to tell you today that anyone who sells or otherwise delivers fentanyl is a serious and dangerous offender.  Fentanyl kills.  Period.

We are in a crisis.  Pennsylvania’s district attorneys ask that you help us respond to it. 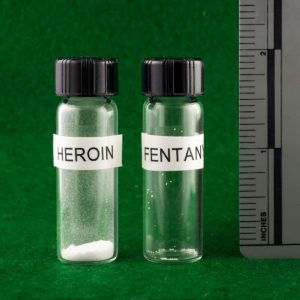 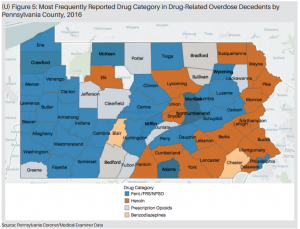 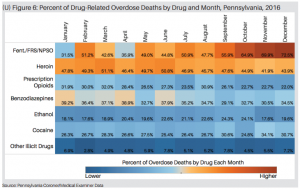 | Follow @PennsylvaniaDAs
16 hours ago
"This is causing death to knowing and unsuspecting users at alarming rates...our small community is not immune." –… https://t.co/OJf7eEmVuK